NOTE: Due to the Coronavirus pandemic, this entire tour was canceled.

We are leaving the page up showing the tour as original planned because we are nostalgic for an experience that never happened.

This awesome discussion between two fire writers did not happen as scheduled either. Hopefully we can make it happen in the future. 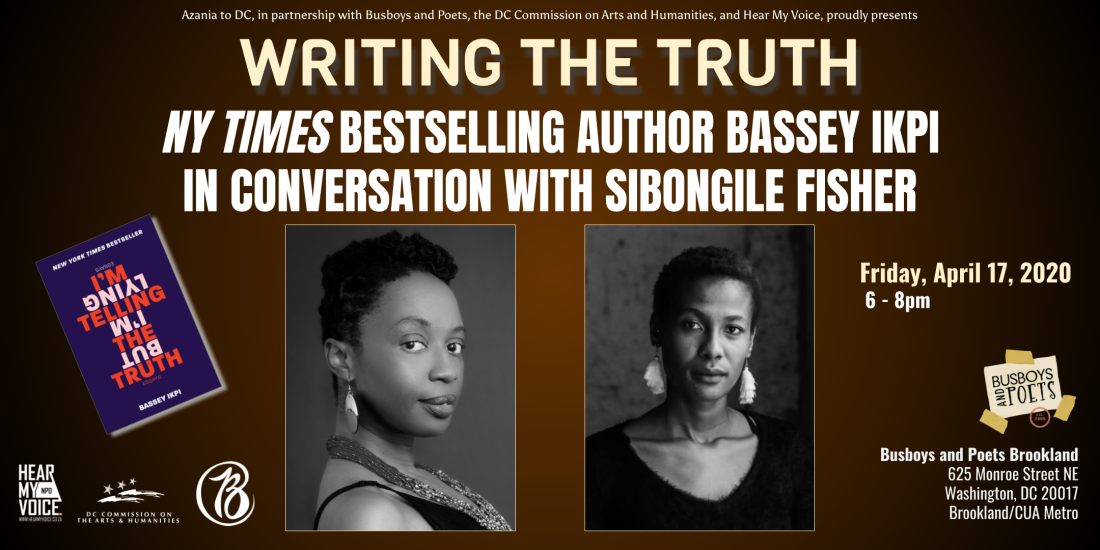 It’s very unfortunate that we could not complete this year’s tour.

Sibongile Fisher holds a Bachelor’s Degree in Marketing Management and a Higher Certificate in Performing Arts from the Market Theatre Laboratory, South Africa. She is a poet, writer, and facilitator. Her short story “A Door Ajar” won the 2016 Short Story Day Africa Prize, was shortlisted for the 2017 Brittle Paper Literary Prize, and also shortlisted for the 2018 Nommo Awards. She won the 2018 Brittle Paper Literary Award for Creative non-fiction for her essay “The Miseducation of Gratitude” published by Afroanthology in ‘Selves’ Anthology 2018. Her play “The Secrets That Raisins Keep” was nominated for best script in the Gauteng Ishashalazi Drama & Dance Festival. She chairs The Raising Zion Foundation, an organization that promotes literature, drama, and poetry in high schools. She has worked with the Market Theatre Lab, teaching playwriting, and has facilitated performance and writing workshops for Arts Alive, The Hillbrow Theatre, and Poetry Zone ZA. She began her journey as a performance poet and has graced stages such as the Joburg Theatre, the Soweto Theatre, and the Market Theatre. As a facilitator, she has hosted panel discussions at The Abantu Book Festival and various book launches for esteemed authors. She has also appeared as a panelist at Time of the Writer Festival (2017), Abantu Book Festival (2018, 2019), Kaduna Book Festival (2019), and the Ake Book Festival (2019). She is passionate about accessibility to arts and technology for teenagers across the globe.

Work: A Poem for Africa

The Miseducation Of Gratitude

Masai Sepuru is a visual and performing artist practicing numerous disciplines including writing, painting, design, and performance. He has performed in many poetry slams, winning two of the biggest slams in South Africa back-to-back (Tshwane Speak Out Loud 2019 and Word N Sound 2018), making him the only poet to hold both champion titles simultaneously. He is also the first champion of the annual Speak Child Slam competition (2018), and is a five-time winner of Word N Sound’s King of the Mic award.

Masai’s poetry has made a mark on and off stage; he helps organize and lead workshops with poetry organizations around the Gauteng province, like Scribe Rites and Blue Pulse. Additionally, because of his degree in performing arts technology, he finds spaces and organizes poetry events around Pretoria with the organizations Poetoria and Black Suburbia. His passion for poetry got him selected to participate in the prestigious South African State Theatre Incubator Program, through which he created a feature-length theatre showcase called ‘it’s all the sane’ adding to many other showcases that he has organized and contributed to, such as Blurred Lines, Toxic with Kori Strange, and Poetoria Showcases with Neo Soul. He has headlined and showcased in poetry sessions for Hear My Voice, Word N Sound, Black Labone, World of Words, and Street Poetry. Follow him online at www.facebook.com/masai.saiboy

Hope Netshivhambe is an international storyteller who was born in Venda, South Africa. Hope holds a Marketing diploma from the Vaal University of Technology and a certificate in Radio and TV Presenting from Oakfields College. She has performed her poetry at the South African State Theatre, the Market Theatre, and in Durban, Kimberley, Port Elizabeth, Cape Town, Tsakani, Mamelodi, Cosmo City, Vaal, Venda, and at schools, seminars, churches, and on radio stations and TV. She has been published in “Odd Magazine” (March 2018 edition), and her poem “Conjuring Art” was selected for the Not a Single Story Arts Exhibition, and was then published on the exhibition’s tabloid newspaper featuring Dr. Ester Mahlangu, Yoko Ono, and more than 20 artists from around the world. Hope was a Grand Finalist in the 2016/2017 Tshwane Speak Out Loud poetry slam and festival, and in 2019 earned 3rd place in the same youth poetry competition. In 2019, Hope traveled with Radioactive Blog to an annual festival that takes place at a refugee camp in Malawi. She is part of an ongoing production about gender-based violence called #WEAREDYINGHERE, directed by Siphokazi Jonas, which recently took stage at the ArtsCape in Cape Town. She has also traveled with Fresh Impressions, one of South Africa’s biggest poetry platforms. In 2019, her poetry was accepted for publication on the Avbob poetry competition website, which makes her a candidate for the grand win (to be announced mid-2020). Hope believes strongly in the power of words and stories, and is convinced that the world as we know it revolves around stories. Hope lives by her self-coined mantra, “do what you came for,” which speaks to her purpose. Follow her online at

A Flower, A Flood, and A Savior